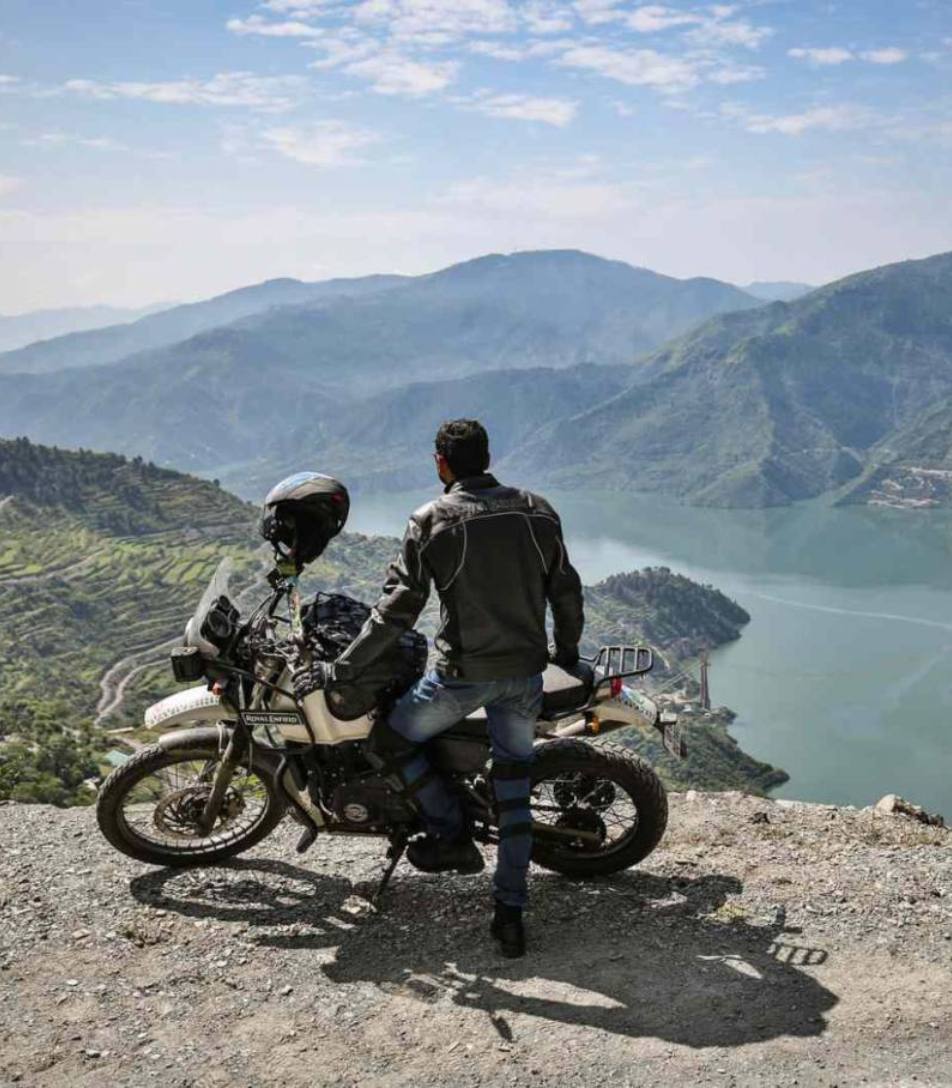 Myths and Legend Tales of Sacred Himalayas with Bike Tour

Uttarakhand is popularly known as the Devbhumi “the Land of Gods” is a heavenly place on earth. It is said that this charming state was handpicked by the Gods. The mesmerizing and surreal landscape of Uttarakhand is embraced with the unblemished and glorious natural beauty. The Uttarakhand is considered as one of the biggest pilgrimage places in India.The two most sacred rivers of India, Ganga, and the Yamuna are originated from Uttarakhand. This state is the home of four sacred sepulchres of Hindus which is also known as Char Dhams – Gangotri, Yamunotri, Kedarnath and Badrinath. The North Indian State is the perfect travel destination for those who want to experience the essence of spirituality and nature. The entire state is enriched with sacred Hindu temples where one can indulge in the alluring adventures and other relaxing activities.

We hold the right to cancel the tour if minimum 10 pax are not booked.

BOOK NOW
Why choose this trip?

At TrekNtales, we don’t believe in providing certain training but the never-ending experience that comes with it. Our certified and experienced trainers work with utmost dedication to make sure our skiing training lessons remain as an unforgettable experience where you create wonderful memories, adopt new skills and receive more than just worth of your money.

Is this trip for me?

If you love riding bikes, then this trip could be the most awaited adventure for you. It consists of long riding days which demands the experience of riding. One must have ample skills and experience to handle the motorbikes professionally. The majority of locations of Uttarakhand have rugged terrain and bumpy roads. All this makes the entire journey challenging for the riders. Along with that, you must be confident with your health and physical condition. So, if you feel ready for everything then nothing can stop you to enjoy this beautiful journey.

Enjoy the spectacular beauty of this location. The tour would begin from Rishikesh enrooting the locations: Hanol, Lakhamandal, Harsil, Nelong Valley, Gangotri, Sem Mukhem, and Dhanaulti. The Trek n Tales is the excellent expeditions in India that would help you explore the Uttarakhand. So, book your tour today with us!

We provide a 500cc Royal Enfield motorcycle in our Tour to Rajasthan, South India, Ladakh, Lahaul & Spiti Valley, Himachal Pradesh, Uttrakhand, Nepal, Tibet & Bhutan. In this Motorbike the gearshift on the left and the brake pedal on the right. Royal Enfield is in highly demand for Tours in India & Indian Sub-continents because it is powerful bike of India & very easy to handle. It gives you a comfortable & trouble-free riding experience with full fun of riding a Motorbike in India. Before you get to see a Royal Enfield, you hear it. With its significant sound and it ́s retro chic, the Royal Enfield bike is a real head turner!

History of Royal Enfield in India

The origins of the Enfield Bullet go back to 1948, when manufacture of the 350cc G2 Bullet started in Red ditch. Royal Enfield Motorcycles built a factory in Madras, South India, in 1955. At the very beginning the bikes where basically used by the Indian Army and Police. The Indian borders, formed by deserts, tropical rain forests and passes in the Himalayas, as high as 5600 m where the bikes are challenged.

There are some essential components that are necessary for making this journey successful and the most memorable adventure of your life. So, here is the checklist for you:

Rishikesh is the celestial city of Uttarakhand, known for its tranquil and spiritual environment. The Ganges, the most sacred river of India flows through Rishikesh. The exquisite setting of this river is completely surrounded by the forest and beautiful hills. The meaning of the word Rishikesh describes a lot about the place. It consists of two words: Rishi and Kesh. The city is also addressed as “Gateway to the Himalayas”. The word Rishi means Sage and the Kesh means locks or hair.

This suggests Locks and hairs of the sage. It is equally popular for both the pilgrimage and adventure tour. It is also a popular destination for meditation and yoga. This place has a lot to offer. Rishikesh perfect blend of holy, adventuresome, surreal and comely location. Some of the popular shrines in this location are Shri Neelkanth Mahadev temple, Vashistha Gufa, Shartughna Mandir, and Bharat Mandir.

The gems of Uttarakhand are not limited to natural beauty or adventure activities. One of the holy places here is Mahasu Devta Temple. It is situated in Hanol village on Chakrata road. According to Hindu mythology, there was this demon named Mandarth. He used to gobble one man every day from the village he used to reside in. The devotees started praying to Lord Shiva. The Load asked Deolari Devi to send her four sons to fight Mandarth. A fierce battle was fought between them and somehow all the four brothers managed to kill the demon. Later after some years when a villager was ploughing the field, he found four Shivlingas.

All these Shivligas were named after the brave sons of Deolari Dev. Since then Lord Shiva is worshipped as the Mahasu Devta in this place. He is worshipped by people at Hanol and other nearby villages. This temple was developed in the 9th century and is located in a valley surrounded by jaw-dropping beautiful mountains and forests. The entire structure of the temple is built in Nagar or North Indian style which is typical in this region. The simplicity of the temple also demonstrates the inhabitants of this region. The head priest told us about the four Mahsus and the various traditions and rituals around the Gods or Devtas. The sanctum sanctorum has idols of Mahasu brothers who are known for their sense of justice. You can see the goats roaming around the premises of the temple. Apparently, when a devotee’s wish is granted, they donate a goat in the temple.

Lakhamandal is the famous temple situated in Chakrata. This temple, not just an ordinary temple as there are many legendary stories attached to it. The Lakhamandal is known as the miraculous abode of Lord Shiva. The Lakhamandal means lakh Shivling. During the ancient times, there was a fight between Brahma and Vishnu because they wanted to establish their superiority over each other. This all resulted in a raging debate and a burning flame pillar occurred there. Both Brahma and Vishnu tried to find the origin of the flame but they couldn’t find it and they ultimately accepted their defeat. The lord Shiva blessed them both and the first Shivlinga was established there and it is known as Mahamandleswar.

This place has one more popular story linked with it. People believe that during the time of Agyatvaas, this temple and the Shivling was established by the Yudhishtra (the elder brother of Pandavas). As soon as Kauravas found out about their whereabouts they decided to burn them alive. Later the Maa Shakti saved them. This is one of the reasons why Lord Shiva and Maa Shakti are worshipped here. Many devotees from all over the world visit this place to seek blessings of Lord Shiva.

According to Hindu Mythology, Jalandhar was the daring king of demons. He had unbeatable powers that even terrorized the gods. Whenever the Gods tried to defeat him, all his power would increase. This is because of his devoted wife Vrinda. She used to pray to Lord Vishnu for the victory of her husband. All the Gods decided to seek help from Lord Vishnu and they requested him to vow Vrinda, as her husband could only be defeated if his beloved wife would commit adultery outside her marriage.

This is the time when Vishnu used his charm to tempt the Vrinda. Even after this attempt, the love and devotion of Vrinda didn’t shake her morality. Later the Lord Vishnu disguised as Jalandhar to violate her chastity. The Jalandhar was eventually killed by Lord Shiva. At this time Vrinda cursed Lord Vishnu that he would turn into a rock. She also said that he would scatter everywhere in the territory of Jalandhar. This is the reason why this place got the name “Harshil” which suggests that Lord Vishnu is present here in the form of rock.

The Gangotri is devoted to the Goddess Ganga. The river originates at Gaumukh directly from the Gangotri glacier. It is some 18 km away from the town of Gangotri. It is located in the Uttarkashi district of Uttarakhand. The story in Hindu Mythology states that Goddess Ganga took the form of a river. She did this to absolve the sins of King Bhagiratha’s precursors. King Sagar held Ashwamedha Yagna as the proclamation of his supremacy. He sent his 60,000 sons along with a horse. The horse got lost. To trace the horse, the 60,000 sons stormed to the Sage Kapila’s ashram and disturbed sage who was indulged in deep meditation.

The sage Kapila opened his fiery eyes he turned all 60,000 of his sons into ashes. Later, Anshuman (Sagar's grandson) prayed to Goddess Ganga to come down to earth to cleanse the ashes of his relatives. He wanted salvation for them. The Anshuman failed to achieve that; the Bhagirath rigorous meditation made Ganga come down to earth. Lord Shiva tied Ganga and distributed its water in several streams to save the earth from its mighty force. Lord Shiva had to mat his locks to minimize the impact of her fall.

The Sem Mukhem Nagaraja is another popular ancient temple devoted to Lord Krishna. It is also known as Nagaraja. The Sem Mukhem Nagaraja temple or the king of snakes is recognized as the biggest snake pilgrimage sites in the entire Indian subcontinent. The temple complex is very sturdily built and quite old. The style used in the architecture of Sem Mukhem Nagaraja temple is very familiar with the one that was adopted to build the revered seat of Lord Shiva in the Kedarnath Temple. This temple has religiously built doors which demonstrates the mythological scenario in which the Nag raja is spreading out his fan.

This happened when the great proprietary god, Lord Vishnu was playing his flute atop the Nag raja. The visitors from different locations of the country visit this temple for offering prayers and receiving blessings from God.

The Dhanaulti is the home to many popular shrines of India. It is the picture-perfect place full of peace and tranquillity. One of the holiest temples of India the “Sukandra Devi temple” is 10 KMs from Dhanaulti. This temple is devoted to Goddess Sati. She was the wife of Lord Shiva. She immolated herself in the Daksha’s sacrifice of her father because he insulted Shiva by not inviting them to the Yajna. The death of Sati enraged Shiva and he performed Tandav. The Gods requested Lord Vishnu to stop his rage. The Lord Vishnu then Sudharshana Chakra to completely destroy the corpse of Sati. The small pieces of her body fell over the entire region and they become Shakti Peeths. This temple is popular for its beautiful architecture. It is also surrounded by the snowy Himalayan Peaks.